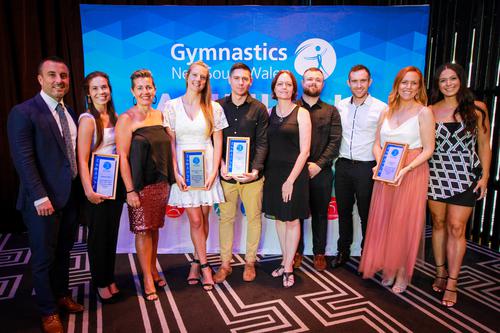 Bankstown City YMCA (the Y) has won Inclusive Club of the Year for the third time at the Gymnastics NSW annual awards.

The Y Bankstown was one of four finalists in the category and was announced as a winner at the ceremony at Dalton House in Pyrmont on Sunday, March 1.

Local Special Olympian Ellen Maher, who trains with the Y, was also recognised with a National Representation Recognition Award for competing in the 2019 Special Olympics World Games in Abu Dhabi.

“We are beyond thrilled to once again be awarded the Club Inclusion Award. Bankstown City Y has always had a strong connection to the disability sector and strives to create a space for all individuals to participate and enjoy gymnastics,” Centre Manager Sarah Cotman said.

“Our disability recreation and Special Olympics classes continue to grow and strengthen with athletes competing throughout the year in Gymnastics NSW competitions. In 2019 we also held our first School Inclusions Competition and won Canterbury Bankstown Council’s Zero Barriers Award.”

Special Olympics and GymAbility have been running at Bankstown for over 15 years and local Y gymnasts Ellen Maher and Ashley Kuhle are heading to the Trisome World Games for athletes with Down Syndrome in Turkey later this month.

“We train 20 members in our disability programs Special O and GymAbility and we are so excited to watch Ellen and Ashley compete on the world stage in Turkey at the end of March,” Gymnastics Coordinator at the Centre Jessica Mavridis said.

Dominic Briscas from Bankstown City Y was also a finalist in the Men’s Artistic Gymnastics International Development Athlete of the Year award on the night.

The club hit over 1100 gymnastics members across the year and are currently running 145 classes per week.

Other Y NSW gymnastics clubs Caringbah, Epping and Penrith were also recognised at the ceremony for attracting over 1000 members to the sport throughout 2019. Epping Y was a finalist in the Large Club of the Year category.

Find out more about gymnastics at the Bankstown City Y by visiting https://www.ymcansw.org.au/centres/bankstown-city-ymca/