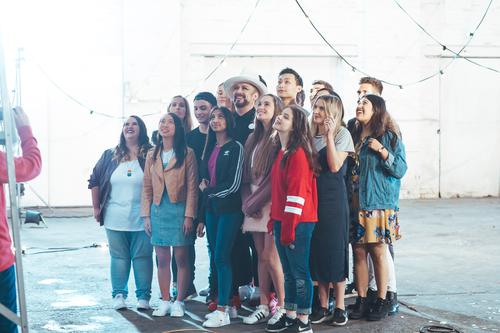 Giving young people a platform for their voices to be heard is at the core the YMCA’s new Why not? Campaign. The campaign launched today, and was kicked off by international music superstar Boy George, who re-interpreted the Village People’s iconic YMCA song to make it more relevant today.

The inspiration for the campaign was born from new research by the YMCA that has revealed the main issues today’s young people care about¹.

Of the issues that young people feel they aren’t being heard on, youth unemployment ranked first (87%), closely followed by marriage equality (86%) and mental health (80%). Almost three quarters (74%) of Australians aged 13–22 don’t believe those in power are making the best decisions possible for future generations.

YMCA Australia CEO, Melinda Crole, explained that the findings compelled the organisation to take such a passionate public stance: “Young people have overwhelmingly told us that their voices are not being given a say in decisions made by governments, institutions and employers that affect their lives.”

YMCA NSW CEO Leisa Hart echoed these sentiments: “We see young people across NSW struggling with these issues every day, that’s why we have a range of programs dedicated to helping them.

“In fact, our Youth Parliament program received over 150 applications this year and the candidate representation for 2017 will cover more electorates and be more diverse than ever before. Our teen health and wellbeing programs have also increased in participation, and our partnership with the ‘Girls Make Your Move’ initiative has certainly helped make this happen.

“At the YMCA we truly believe in the power of inspired young people and it pains us that they feel voiceless, so if we can give a voice to them and help the future leaders of this nation be heard, we will do it!”

Boy George’s take on the cult song puts the focus back on the lyrics, which creates an anthem of support and encouragement for young people.

He said: “The world can be a scary and overwhelming place, it’s easy to feel you’re not important and that your views don’t matter. When the YMCA invited me to be a part of this call to arms, I couldn’t say no – this message is too important.

“What if the answer to some of our biggest problems is in the mind of a young person who feels there’s no place in society for them? We need to give them a voice and start listening.”

Youth ambassador, Kate Morrison, age 22, said the campaign’s aims will only succeed if young people take the opportunity to continue to speak up.

“As a young person I think it’s fantastic that the YMCA is helping us to have our voices heard on the issues that matter to our generation – marriage equality, youth mental health and youth unemployment. I encourage young people to use this moment to make your views known via the whynot.org.au site and on social media using #whynot. Be involved – every voice counts!”

Young people can head to whynot.org.au to voice their opinion and view Boy George’s new version of the YMCA song. Join the conversation using #whynot on Facebook, twitter and Instagram.

About the Why Not campaign

The YMCA has established www.whynot.org.au as a platform for young people. Initially, the site will encourage and enable young people to contact those in power about the issue they would like addressed. From here, the YMCA hopes to evolve the site to become a beacon for young people wanting to be heard by society filled with resources, opportunities to identify issues and work towards solutions.

YMCA NSW is a community not-for-profit organisation committed to healthy living, empowerment and positive social impact. We believe in the power of inspired young people to effect positive change in the world. We support this by offering a range of programs and services at more than 100 locations across NSW and the ACT. YMCA NSW is recognised as a Safeguarding Children accredited organisation by the Australian Childhood Foundation. To find out more, visit www.ymcansw.org.au

¹Research conducted by independent researcher Insync in May 2017 with a representative sample of 500 young people across Australia aged 13-22 years.