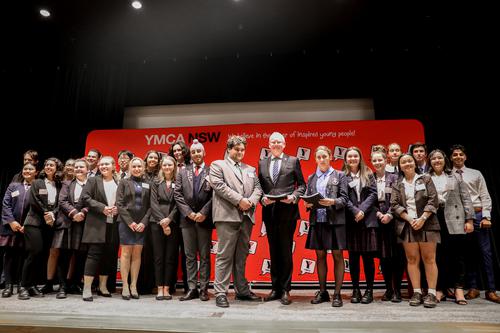 The bills were developed over four sitting days where years 10-12 students from across NSW, debated bills in Macquarie Street. The bills were as wide-ranging as mandatory Mental Health First Aid training for teachers, more regulation of ‘buy now pay later’ providers, and strategies to reduce NSW greenhouse emissions by 30 per cent by 2030.

“At The Y NSW, we believe that when young people speak passionately about what matters to them, we need to listen because great things follow,” she said.

“Our Youth Parliament program is a crucial platform for young people to create change and have their voices and ideas heard by politicians, policymakers and the general public.

experiences on issues of importance to them.”

Over the past 17 years, the highly successful program has played an important role in the public discourse, with around 2000 participants and six pieces of legislation passed into NSW Law.

For your editorial use, below you will find a selection of inspiring quotes from this year’s 2019 Youth Parliamentarians – First names and locations of residence have been detailed against each quote:

“Youth Parliament is a melting pot of so many inspiring and passionate young people from across NSW. It was great to be able to learn about all the different perspectives and views and to gain greater perspective,” Zoe from Newcastle.

“I feel like a lot of young people see politics as a thing for adults that doesn’t affect them, but really it does affect us and can be quite interesting if you take the time to get involved. I feel like I’ve been able to make a difference having our bill passed on to the politicians,” Imogen from Northern Tablelands.

“Being an Aboriginal person I have a lot of areas I am passionate about in terms of aboriginal affairs, I wanted to be able to get my ideas out there. It’s also really engaged me a lot more in my local community and the wider community as well,” Mackenzie from Camden.

“The biggest thing I got out of the program is that the world I see is so small. Getting to meet so many people I got an idea of just how big our country and the world is. Its helped me to see that I can look further than our local community,” Hannah from Parramatta.

“You gain experience and advocate on issues that are not only close to your heart, but important for the state and the country,” Leon from Lakemba.