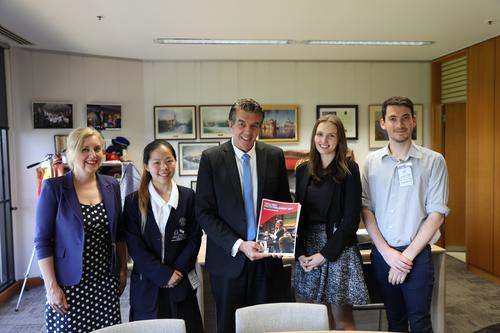 Calling for changes to the Education Curriculum

Mr Williams says he looks forward to sharing the views of the YMCA NSW Youth Parliament with his Parliamentary colleagues.

“The NSW Government is proud to work with YMCA to host NSW Youth Parliament.

“This is a great opportunity for young people from around NSW to participate in parliamentary processes and gain experience in driving change through democratic institutions,” Mr Williams said.

YMCA NSW Youth Parliament is a state-wide program aimed at providing a platform for young people to participate in legislative debate and decision making.

“At the YMCA NSW we believe in the power of inspired young people, but we also know young people throughout NSW feel like they are not being heard on the issues they are passionate about.

“Youth Parliament has been breaking down this barrier and providing a platform for young people to make a tangible impact on state legislation for 16 years,” YMCA NSW Executive Leader Community Service, Louisa McKay said.

This year there was about 100 participants from  almost 60 state electorates who met at Parliament House NSW at the end of September, to discuss issues that youth face.

YMCA NSW Youth Parliament Premier Lucy Witherdin,17, was attracted to the program as she saw it as an opportunity to stand up and give a voice to issues that she’s passionate about.

“I was quite confident to move into Youth Parliament and talk about issues quite comprehensively that I’ve wanted to talk about for a long time and also to peers who are just as passionate about those issues.

“Being young you’re not always taken seriously and I think a lot of people felt empowered by the experience.

In past years bills have been ratified into state law, including the Domestic Violence Disclosure Scheme.

“Empowerment is the best way to describe YMCA NSW Youth Parliament, and it’s not just in the fact of what you’re talking about or the topics, but it’s the communication skills that it equips young people with,” Lucy said.

YMCA NSW Youth Parliament students found a desperate need for a course that better prepared them for adult life and gave them skills like social, technological, lifestyle and financial skills.

The Future Fundamentals Bill emphasises the need to introduce a compulsory practical life skills course into the high school curriculum for years 7-10.

“We take subjects like maths and English but they don’t always have real life applications, so what it focused on is how we equip those kids who aren’t necessarily driven to academics and future issues like handling money.”

“I think young people have a way of seeing things that isn’t as restricted, we see and issue and think about it in a way that is different because our experiences are different,” Lucy said.

Issues such as domestic violence education, police PTSD, access to mental health and LGBTI conversation therapy were also debated and put forward to the Minister.

“This year’s program was no different and the creative and well researched work the participants of the chambers of NSW Parliament did, highlight the strength of empowered young people.

“Young people are the focus of everything we do at the YMCA NSW and Youth Parliament will continue to bring their voices to the halls of power year after year,” Ms McKay said.

About the YMCA: YMCA NSW is a community not-for-profit organisation committed to healthy living, empowerment and positive social impact. We believe in the power of inspired young people to effect positive change in the world. We support this by offering a range of programs and services at more than 100 locations across NSW and the ACT. YMCA NSW is recognised as a Safeguarding Children accredited organisation by the Australian Childhood Foundation. To find out more, visit www.ymcansw.org.au