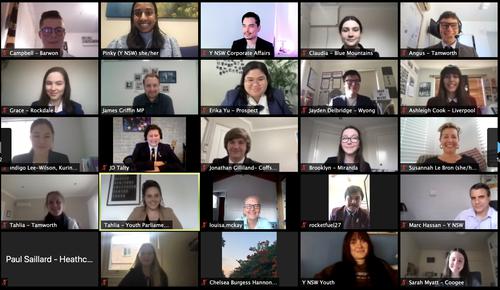 The Y NSW Youth Parliament has voted in favour of mandatory COVID-19 vaccinations for all Australians and visitors to Australia, in a mock debate chaired by Parliamentary Secretary for Health and Veterans, Mr James Griffin MP.

Y NSW Youth Parliament was due to take place at NSW Parliament House in June but has been postponed due to the Greater Sydney lockdown. The Y NSW held the virtual debate on June 8 to ensure this year’s cohort have their voices heard on the issues that matter to them.

The Y NSW Youth Parliament cohort elected the debate topic via an online poll, and argued for and against whether a COVID-19 vaccine should be mandatory. The selection of the topic reflected the salience of this issue for young Australians. Eight Youth MPs argued their sides formally with speeches to the chair before the virtual floor was opened to 15 other youth MPs to seek the call.

In her speech, Lead Supporter of the Motion, Indigo, Member for Ku-ring-gai, 16, argued that we have a moral duty to mandate a vaccine, and secondly, mandatory vaccination would greatly benefit the economy.

“If only one unvaccinated person walks into a public place, they are placing every single newborn, every single infant, every single immunocompromised individual and every single person who is allergic to vaccines at risk of dying. It is irresponsible. It is selfish, and it is unAustralian,” she said.

In his reply, Lead Refuter of the Motion Campbell, Member for Barwon, 16, argued that mandating a vaccine would be unfeasible because of disbelief and distrust in the government, and unethical in terms of violating individual bodily autonomy.

“Before the Australian Government can even ponder the idea of mandating vaccines, the existing method of providing vaccinations needs improving, and resources and information for the public concerning Government actions needs to be accessible and constantly updated to gain the public's trust and approval,” he said.

Following the final vote, mandatory vaccination was supported 16 to 7.

CEO of the Y NSW Susannah Le Bron said the organisation was committed to delivering the unfiltered thoughts of NSW youth to those in power, in lockdown and out.

“Vaccination is a hot-button issue across the state and country right now and it is absolutely vital that young people, who are for the most part currently ineligible for the jab, are given supported avenues to weigh in on the debate and share their unique perspectives,” Mrs Le Bron said.

“We had an afternoon of robust, intelligent and informed debate. Knowing that these inspiring young people are our future leaders makes me so excited and comforted… I know that as I grow older, I'm going to have the most amazing people supporting and shaping our future. I’m exceptionally proud of the way our cohort handled themselves and grateful to Mr James Griffin MP for his participation and support of the initiative.”

Mr Griffin MP said the debate was very timely and insightful for him to chair.

“Each speaker demonstrated that even through zoom there is no shortage of passion. Some incredibly sharp and insightful themes and comments and views and perspectives were brought to the table from right around the state,” he said.

Mr Griffin also thanked participants for their involvement in the Y NSW Youth Parliament program, which he said creates the leaders of tomorrow.

“I've got no doubt whether it's in the photos that live in the halls of Parliament, or the peak bodies or the Policy Institutes or public service that do such a fantastic job, that your faces will be on there one day. You will continue to make a wonderful impact in our community and in our society,” he said.

Y NSW Youth Parliament is the state’s premier youth political empowerment program. Aimed at young people in years 10, 11 and 12 or equivalent age, the program provides a platform for young people to have their voices heard through legislative debate and decision making.

Y NSW Youth Parliament is now scheduled to take place in September 2021, with youth MPs attending a weeklong camp ahead of four days of structured debate on the floor at NSW Parliament House.