Y NSW and YWCA get together for Mardi Gras debut 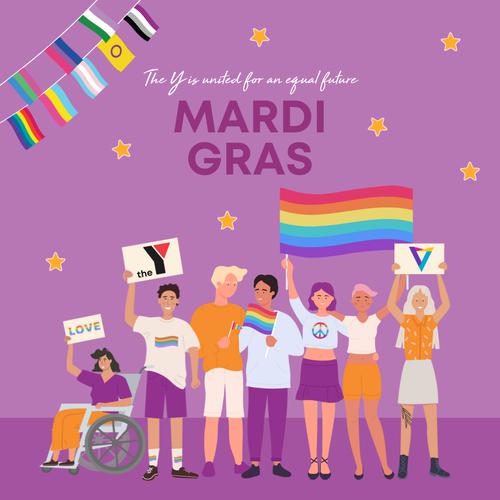 The Y NSW will be taking part in the Sydney Gay and Lesbian Mardi Gras Parade for the first time in the organisation’s 148-year history. To mark the occasion, the Y NSW is partnering with the YWCA Australia.

The Ys have been rehearsing together and will share the stage at the Sydney Cricket Ground on Saturday 5 March in the world’s biggest LGBTQIA+ celebration.

“The theme for Mardi Gras this year is ‘United We Shine’ and the theme for our float is The Y is united to shape an equal future,” said Y NSW’s Brand Manager, Bryan Jader, who is also the Co-Chair of the Y NSW’s Affinity Network.

“I’m so happy because there are some members either marching for the first time or this is the first time they’re going to the Mardi Gras and coming out as somebody who identifies,” Jader said.

“We embrace and promote diversity and inclusion, it’s at the heart of what we do and being part of Mardi Gras really shines a light on how the Y celebrates and creates safe spaces for our LGBTQIA+ community,” Ms Le Bron said.

“Our people, employees of all ages, from the Y NSW will be dancing up a storm including people who identify as LGBTQIA+ and allies of the community. It’s going to be wonderful.”

YWCA Chief Executive Officer, Michelle Phillips, said Mardi Gras was a fantastic opportunity to be united in the pursuit of gender equality.

“Together we represent the two largest youth movements in the world and our organisations are united in our desire for a better future for LGBTQIA+ youth. Participating in Mardi Gras is an opportunity for us to loudly and proudly share our commitment to stand out and speak out against discrimination inside organisations and in the community,” Phillips said.

“Our participants want to see a more equal future for all. They’re proud to be LGBTQIA+ and allies and can’t wait to shine together, united for inclusion and taking an intersectional approach to our contributions as individuals and as a movement to achieving a future where gender equality is a reality.”

Jader said joining the 2022 Mardi Gras is the realisation of a dream, achieved as a result of a conscious commitment at the Y to create an inclusive and diverse workplace and community at the Y NSW.

“The Y developed the Affinity Network four years ago to advocate and facilitate a culture of inclusion and respect, regardless of sexuality, gender and expression.”

But the Y NSW knew they had more work to do after their application to join the 40th parade was knocked back by Mardi Gras organisers.

“It was a bit of a wakeup call for us, saying ‘yes you are in the community’ but the question back to us was ‘what are you doing to engage with community and actually be relevant to your community, specifically LGBTQIA+ people?”, Jader said.

“And that was a really good takeaway because over the next four years we activated programs like the ‘Welcome Here Project’.”

The two Y organisations have replaced the W and M in their respective names with a love heart to convey a message of non-binary support for the community, and the partnership at Mardi Gras between the two organisations.

And while tempted, the Y float won’t be bashing out the famous Village People anthem. At least not this year.

“We do have really deep roots with the gay sub-culture. You know in the 70s and 80s for gay men, the Y was a really safe place. It was awful to be out at that time and it was safe to be at the Y and be yourself and hang out with your friends,” Jader said.

This year, Jessica Mauboy’s “We got love” will get the Y treatment.

The Y NSW and YWCA Australia are the proud recipients of a Mardi Gras and Google Parade Grant.

About the Y NSW: The Y serves more than 40 communities in NSW and the ACT and employs more than 1500 people. Each year, more than 2 million people visit our fitness and aquatic centres and more than 10,000 children attend our Outside School Hours Care services.

About YWCA Australia: YWCA Australia is an evolving intersectional feminist organisation working towards a future where gender equality is a reality for young women, women and gender diverse people.

We have made young women’s leadership and women’s housing our priority for gender equity in Australia.

Our high-impact evidence-based programs and services are inclusive of all women and gender diverse people and offer support with housing, homelessness, safety, wellbeing and young women’s leadership.