The Y NSW says thanks on OSHC Educators' Day 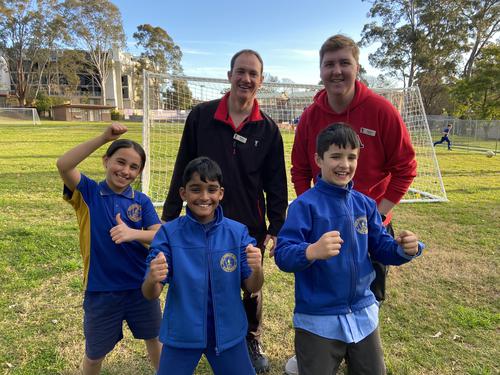 CHILDREN at the Y NSW’s Outside School Hours Care centres will celebrate the work of their Educators this week.

The inaugural OOSH Educators’ Day is on July 29 and recognises the invaluable work of Educators at OSHC centres across NSW.

As one of the more forgotten sectors of the childcare industry, this day was created to ensure the acknowledgement of this profession.

For the Y West Pennant Hills OSHC Educators Daniel May and Martin Vickery, it was an unexpected career path.

Mr May, 23, of West Pennant Hills, had thought about getting a job in OSHC or childcare to allow him to work while studying a media degree at university.

“I love just getting to know all the kids,” he said.

“They’re at school all day talking to teachers and doing school work, so I’m the fun guy they get to play sports and games with at the end of the day.

“I’m almost always outside playing soccer, cricket or rugby. I love running around and always insist on doing it.”

Mr Vickery, 43, of Thornleigh, left a bank job three years ago to join the Y NSW as an Educator.

“I was teaching taekwondo and parents used to say ‘what do you do for a living?’ and they couldn’t believe I worked at a bank and didn’t always work with kids,” he said.

“I love sport and I get on well with kids, so I did a few weeks on relief, liked West Pennant Hills as a good sporting OSHC and decided to join them.

“I love all sports – when the kids are disappointed if it’s raining in the morning, I say I’m disappointed too.”

The 2016 Early Childhood Education and Care National Workforce Census showed only 18.3 per cent of staff employed in OSHC were male, which was significantly higher than an industry standard of 3 per cent.

With many people unemployed due to the COVID-19 pandemic, working as an Educator could be a job many men may not have considered before.

The Y Lycee Condorcet OSHC Educator Zach Browning said it was important to have a diverse range of Educators at a centre.

“Especially for the kids who are growing up and figuring out what the world is, having positive male influences is really important,” the 20-year-old from Maroubra said.

“I think having male educators and teachers is just as important, otherwise some kids might never really see much of a positive male role model.

“Generally, it just gives a bit of balance in the interaction between students and Educators.”

Mr May said there was a stigma around male Educators, but it was important to push past it.

“When I started working there was just three of us, now there’s four at this centre and I hope that number keeps growing,” he said.

“All the boys we care for at OSHC appreciate being able to have a guy Educator they can talk to and of course play sports with.”

Mr Vickery agreed and said it was important for there to be balance.

“It’s good for the kids, they’ll talk to men and boys about other stuff than they will talk to the female Educators about,” he said.

“With me, they will come up with a lot of random stuff, sometimes on topic and then they’ll just jump.

“I think they’ll talk to me about anything that crosses their mind. I think if they had a need to tell someone something, they’d turn to me more than others.”

With 57 centres, the Y NSW is the largest not-for-profit provider of OSHC in NSW.

“Now more than ever we need to say thank you to our OSHC staff,” she said.

“Throughout the unprecedented times of COVID-19, our Y Educators and other childcare professionals have been an essential service on the coalface caring for our children.

“As an organisation that believes in the power of inspired young people and is accredited for child safety with the Australian Childhood Foundation, we know how important it is to have Educators on board that deliver, quality, diverse, fun, nurturing and safe Before and After School Care and Vacation Care.

“So, thank you to Daniel, Martin, Zach and all the OSHC Educators out there for caring, inspiring, protecting and encouraging our kids.”

Find out more about the Y NSW’s Outside School Hours Care here.

The Y NSW Youth Parliamentarians back in the House